Health in all What?

I get this question almost daily. Health in All Polices or HiAP is a collaborative approach to improving health by integrating health into the decision making process.

Within government, Public Health agencies work to provide services, health education, tracking and surveillance of diseases, and other health interventions.  But health is affected by more than just access to health care, exposure to germs, and vaccines.

Our health is affected by everything around us – income and income inequality, education, race/ethnicity/gender and related discrimination, built environment, stress, social support, early child experiences, employment, housing, transportation, food environment, social standing, and more. The World Health Organization says that “These environments shape opportunities to make healthy choices and access to resources for health. Promoting healthier environments has a large impact on the health of individuals and communities; this is especially important in disadvantaged communities which often have unhealthy environments across many dimensions.”

So what does that mean for me? 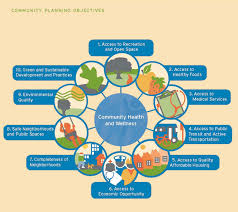 State and local departments like Planning, Engineering, Education, Park and Recreation, and Finance all make decisions and polices that impact our health – where and how we live.

This can be anything from creating an internal policy to serve only healthy foods at city meetings to adopting a comprehensive plan for complete streets – streets that put pedestrian, bicyclist and public transit users on equal footing with motor vehicle drivers. HiAP not only encourages public departments to put health first, but encourages departments to work together to realize shared goals.

Who is doing HiAP?

There are a number of countries, regions, and counties around the world that have adopted HiAP or similar policies. In 2010, California became to first US state to adopt HiAP. Currently, the CA Health in All Policies Task Force is largely driving HiAP efforts in CA and has worked collaboratively with a wide range of departments to identify problem areas and prioritize solutions. In the coming months CA HiAP Task Force will be releasing a series of HiAP how to documents for Counties and Cities. The City of Richmond and other Californian cities are leading the way in implementing HiAP within their jurisdiction.

To learn more about the incredible local HiAP efforts see these links:

Thoughts from a Millennial Mom on Faith, Parenthood and Culture